Fish Report with a Beat...down, or, Free Willy

A fish report with a beat, hah, title from the glorious days of KMET FM radio in Los Angeles. Can I get a whoya?! (Feel free to google it...later) I'll add my definition to the title at the end of the trip report, for what it's worth.

Lynn and I both had been working crazy hours and getting ready to go camping was an issue this time. I had just bought a little old, very old outboard motor and we really wanted to go back to Magic Lake to try it out before the lake was drained too low before winter, being a reservoir and all.

We got a late start but were in a fabulous mood...until pulling into a camp spot. One of the trailer tires literally dragged, drug, ok made a furrow in the dirt the last three feet before we stopped. Dang, WTH? No kidding, I pulled the tire and hub off to find the brakes and wheel bearings had disintegrated and the whole shebang was now fubar. You know, f'cked up beyond all repair, fubar. Being late afternoon we could only set up for the night and sleep, knowing there was a drive back to Boise in the morning without the trailer, another 4 hours one way. Up early we made the drive back to town, found parts and drove the 4 hours back. Of course my favorite thing to do is bearings and a brake job in the dirt when I should be out fishing with my new old motor. The old inner bearing race was really stuck on the spindle and was a fight of hours to get off, where's a slide hammer when you need one. A full day of a short vacation was lost, holy christmas on a cracker. 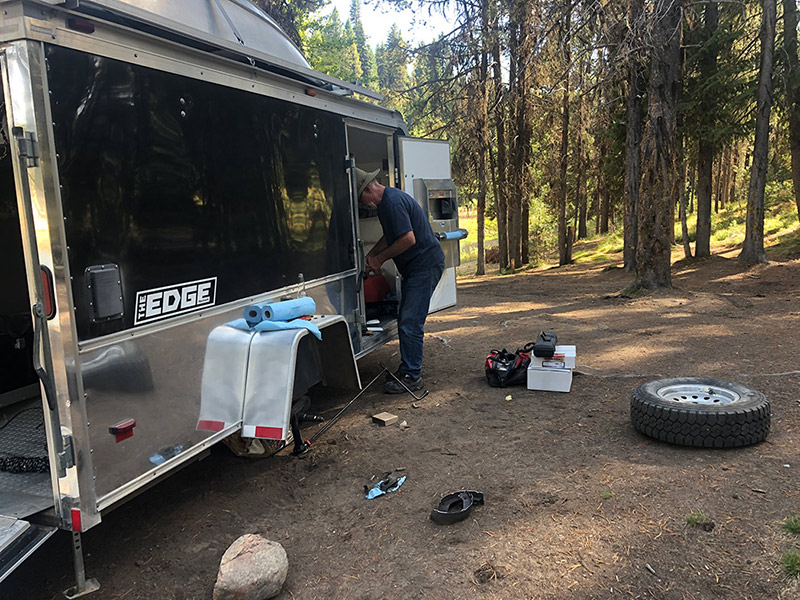 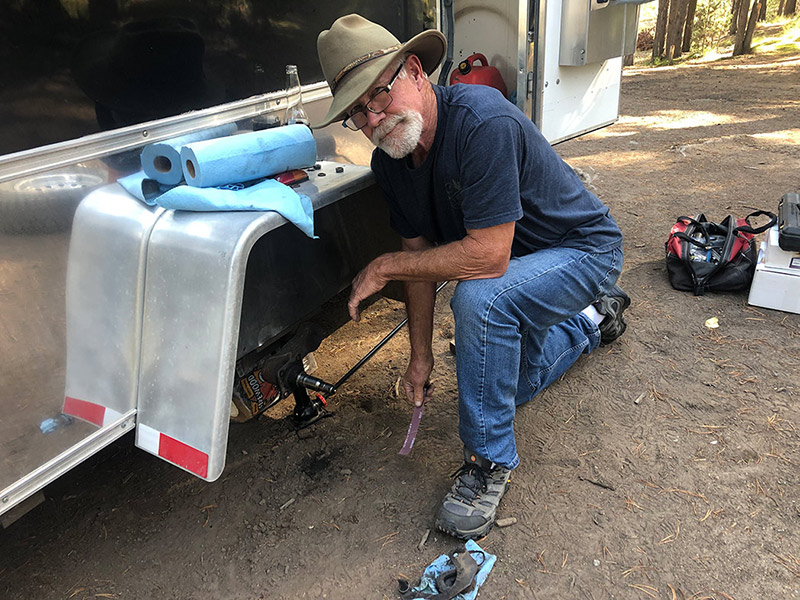 These are not my happy faces...and many new four letter words were invented. Ever pack wheel bearings in the dirt? I tried to tell my face to smile, no luck. 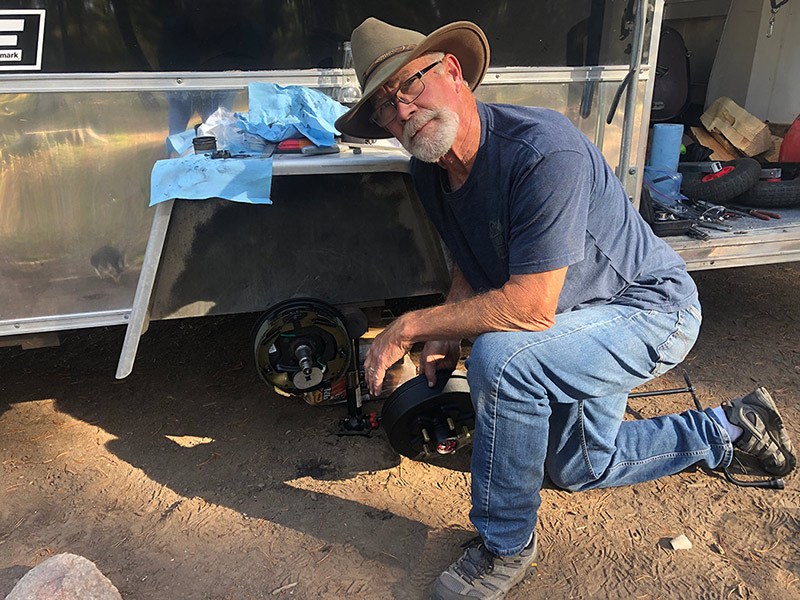 Got up the next day and tried to start again, now fully anxious that something else was going to happen.

Three years ago I painted a customers house in return for a new work trailer with a boat on top. What a deal!

The logistics of getting the boat and truck camper back over to the camp spot became an issue. The truck and camper had to be backed up to make a turn into camp and Lynn has never backed up a trailer. That left Lynn having to drive the boat with a motor we had never used. She did it with style.

The road down to camp 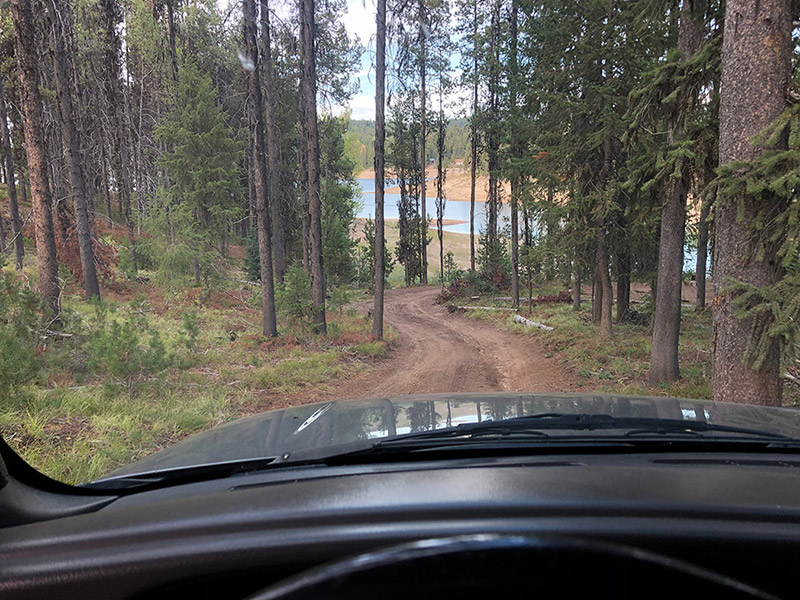 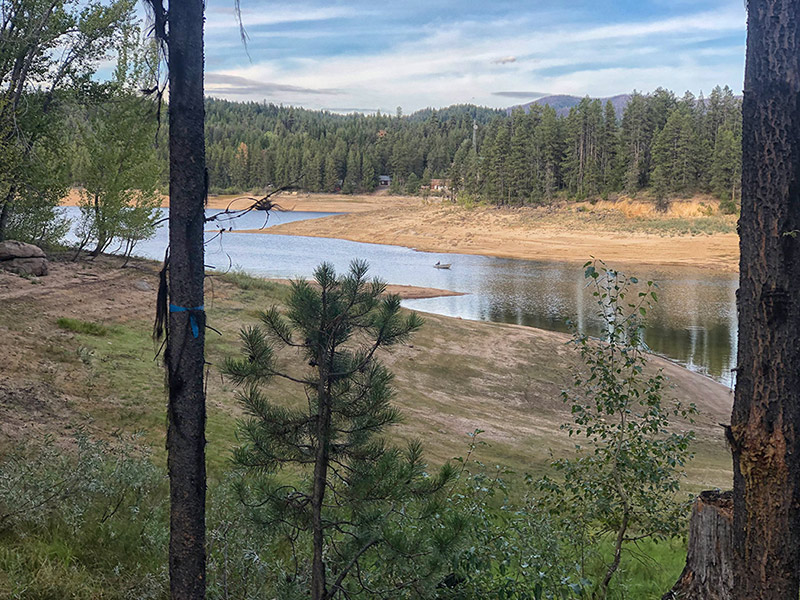 No pics of camp were taken, we had to go find fish... 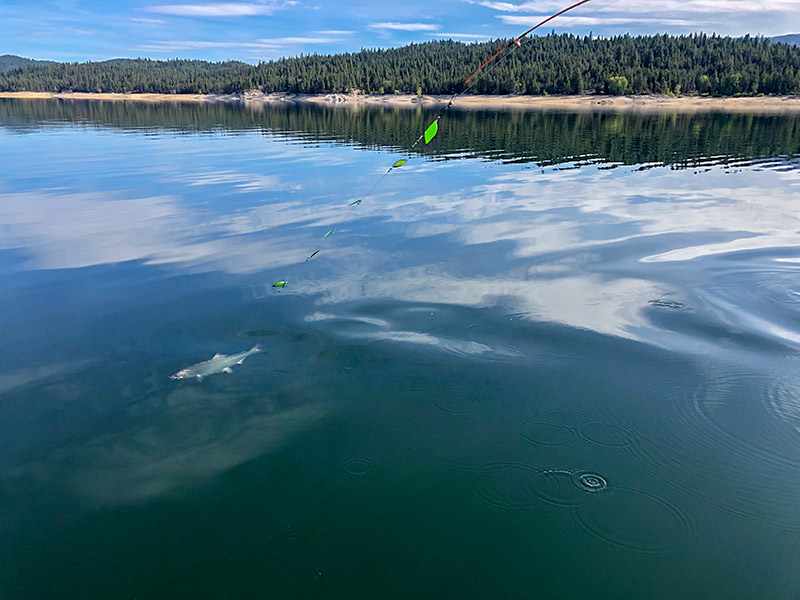 A gorgeous lake trout maybe around 3 pounds! I put it on the metal stringer which keeps them alive longer. As we motored on I looked over to see it swimming along on the stringer, and I just couldn't do it. I don't know why but Lynn and I agreed, free Willy happened. It was satisfying to see it glide away into the deep, knowing it'll live a little, ok maybe a lot longer.

Don't worry, we caught a few more smaller trout that we did keep to Traeger when we got home. 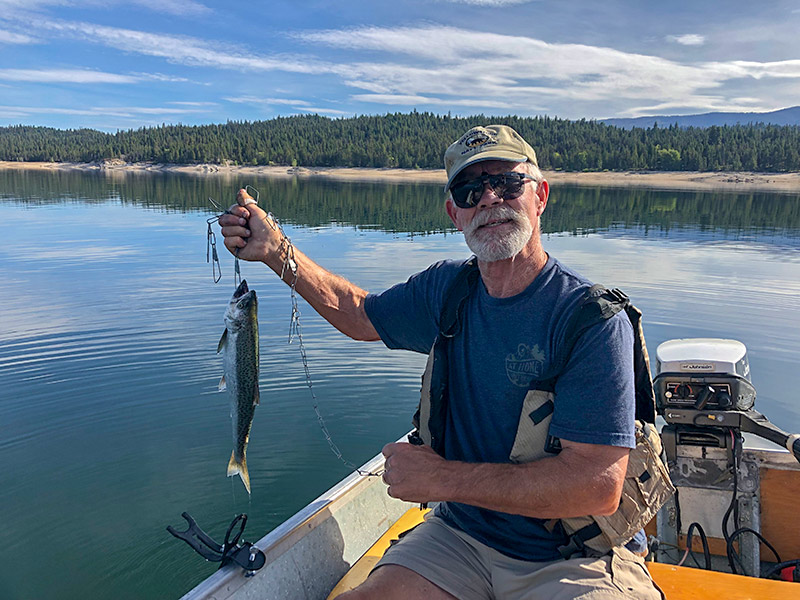 She is my bow motor when in the canoe, now just a fishing Grandma. 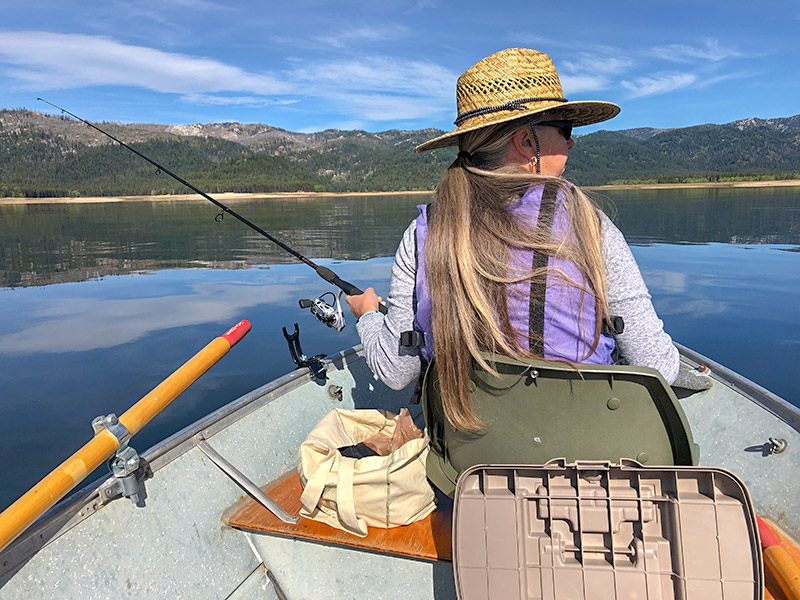 Camp is up in the trees. When we were here two months ago the water level would have been right below camp. The water is let out of the lake to make room for next years snow runoff. 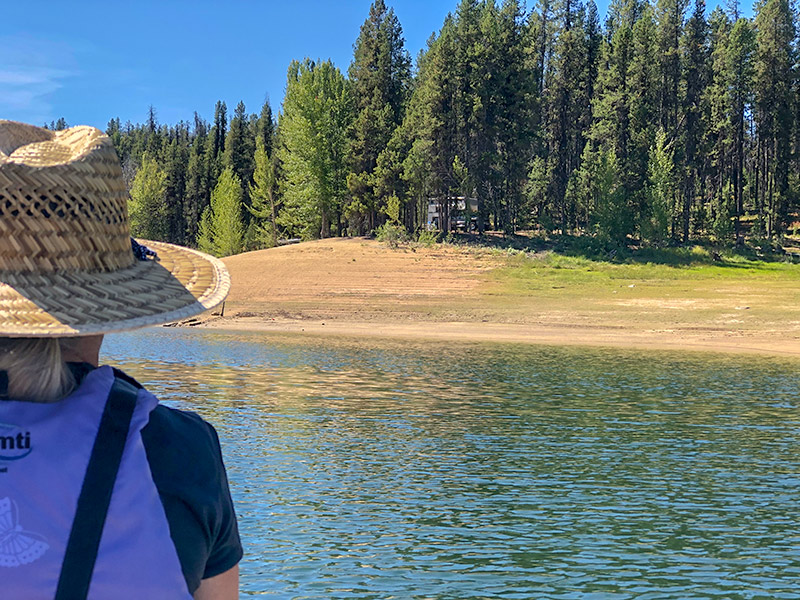 Later that eve our little dog Bailey developed some kind of issue in her neck it seemed. Very strange, it looked like it locked up making her hold her head very strangely and looking possessed. Then the screaming started. Blood curdling and non-stop. Lynn gave her some Rimadyl we had in the truck for Duke when he needs it for old dog syndrome, for her pain. (We left him home this trip, not wanting him diving in the lake from the boat.) I had to have tequila for MY pain...in my ears from the screams. Look, all I can tell you is that margaritas, they're not just for breakfast anymore.
With me feeling like a bug on the windshield of life we left the next morning.

Screwed, blued and tattooed I dropped Lynn off to deal with Bailey and the vet. She did have to work the next day anyway. Meanwhile I was trying to hang in there like a hair on a biscuit and still get in some fish time, so I left home and headed back into the mountains.

There was a place we'd tried to get to a few years ago but the mountain pass you have to cross has snow well into summer making it impassable when we tried. It is as far up as you can drive on one of the forks of the Boise River and on the backside of the Sawtooth Mountains. It took me 3 hours to drive 30 miles of dirt road, a full hour for the last 7 miles. It was so rough it could jar your preserves. Yes I know, the road looks good here... 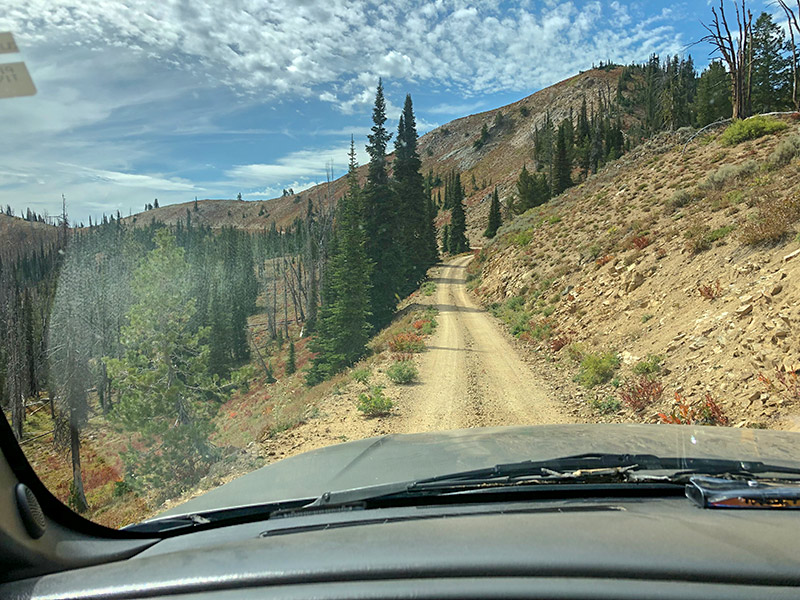 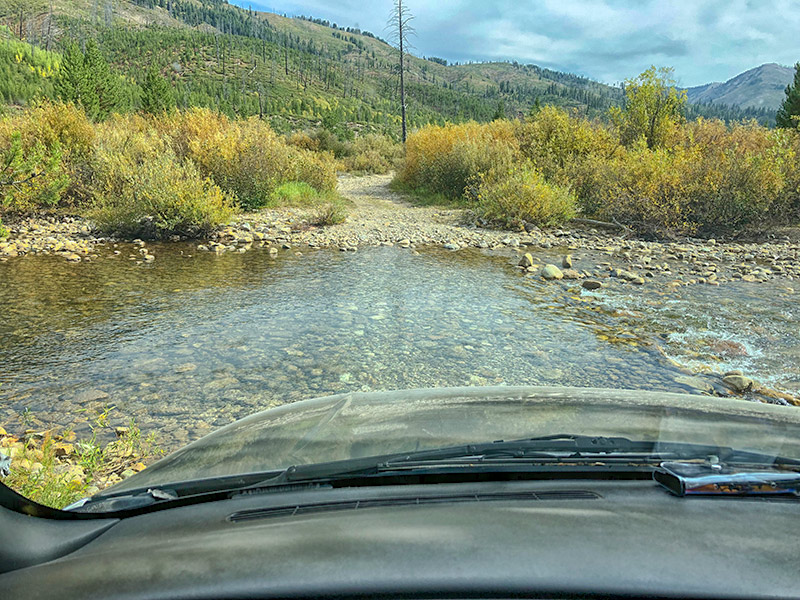 I stopped and fly fished two holes under the bridge, using my new Tenkara fly pole. THANKS BEN! My good friend that turned me on to this new old way of fly fishing from Japan. The technique is catching on here in the States and I can see why, it's simple. As simple as fishing can be, like having just a willow stick pole and string fishing line. There's only a pole (carbon fiber), incredibly long at 14 feet, and line about the same length as the pole with no reel, to generalize. And of course some leader with a fly. The action of the pole is incredible making the six inch brookie I caught here feel like a 16 inch fighter. And yes, the bridge is out, making me drive through the shallow river. 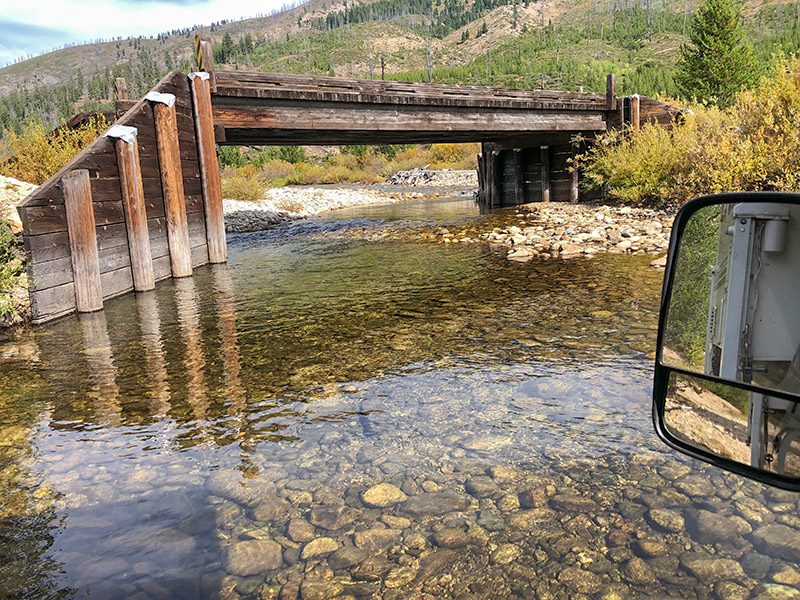 I drove to the very end of the road and found a great place to camp with the music of both a stream and a river in my ears, one flowing into the other with me in between. Can it be said that I was streaming live? Yeah baby! 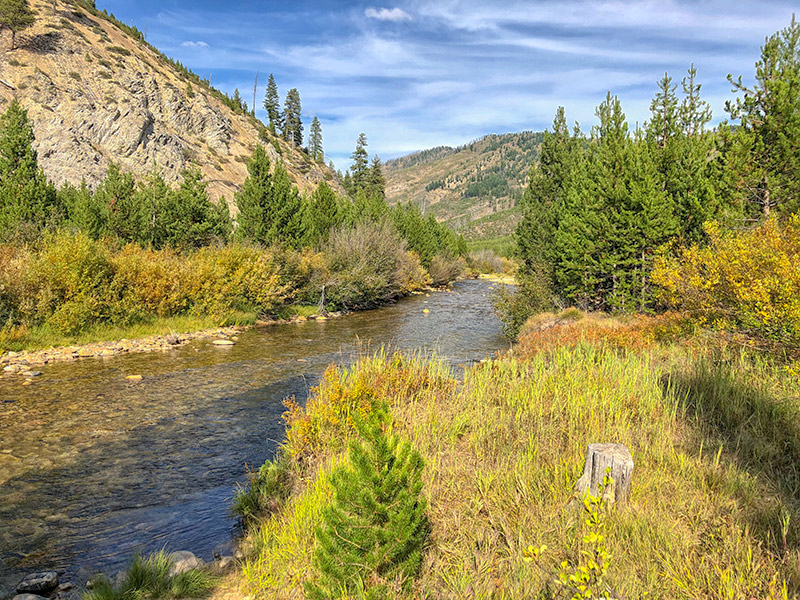 I took very few pictures, wanting to get fishing. 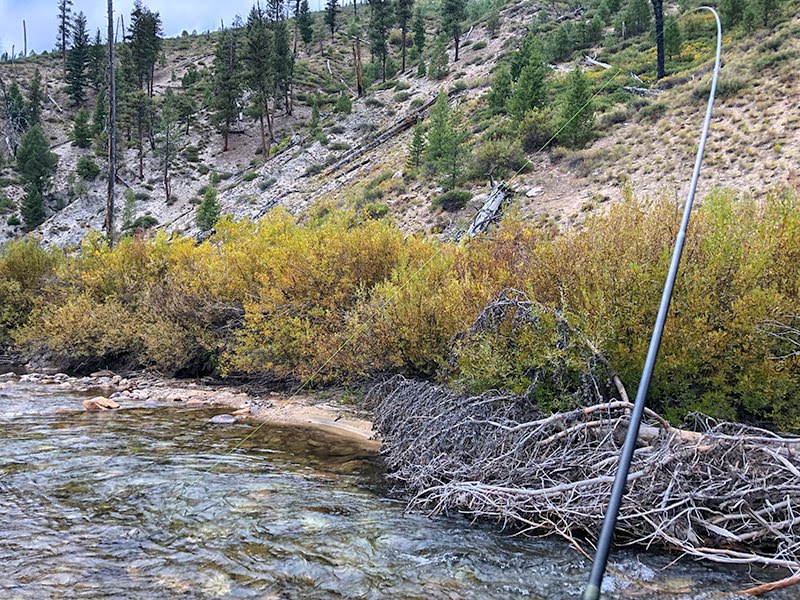 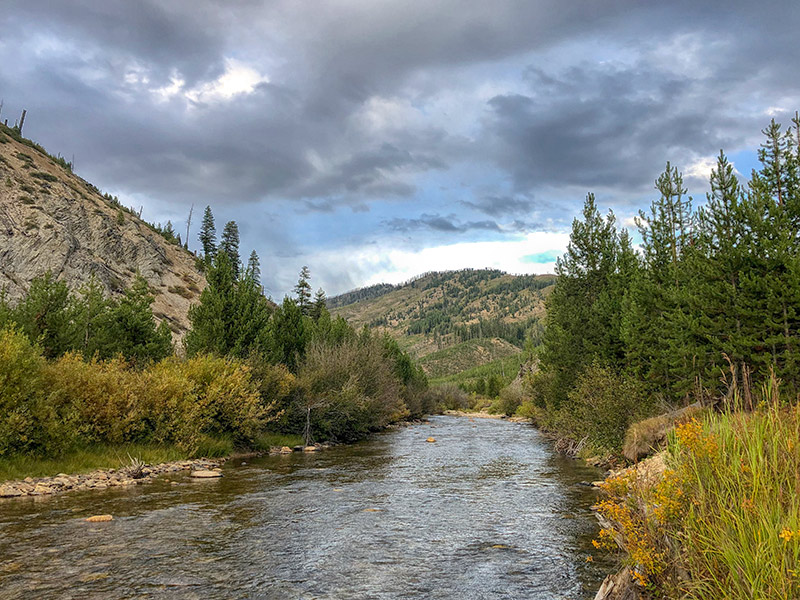 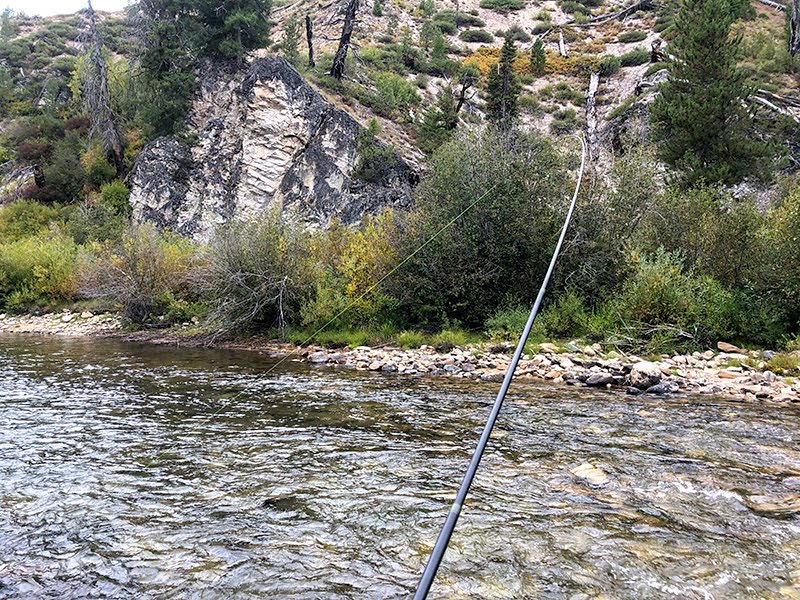 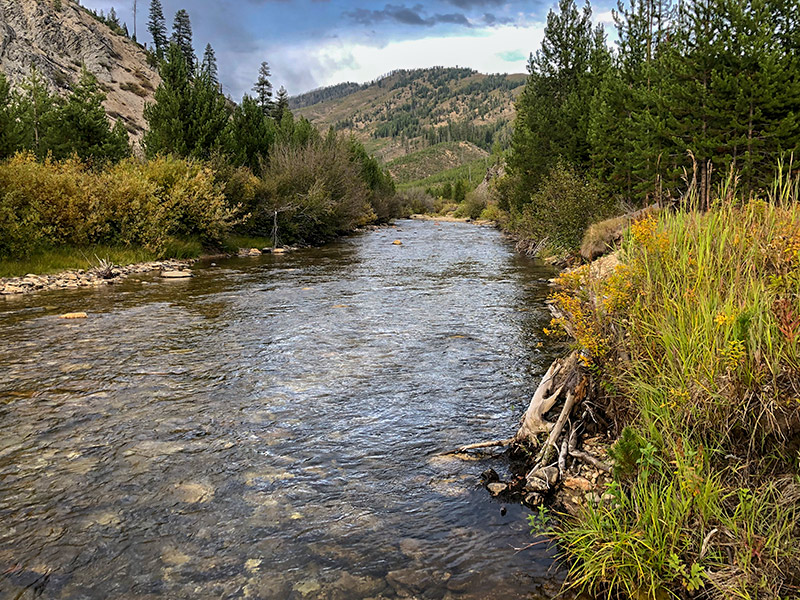 I had a fire and grilled hot dogs that night, saving the trout for the Traeger at home. Waking up in the camper to the sound of rain I instantly fell back asleep very soundly. The sound of rain on a camper roof does that to a guy, except for the feeling that I too, needed to make water.

It rained all night and without waders I didn't really want to be walking, and falling, in the river in 41º air temps while in short pants. In Boy Scout terms, Be Prepared...I was not. So I left. 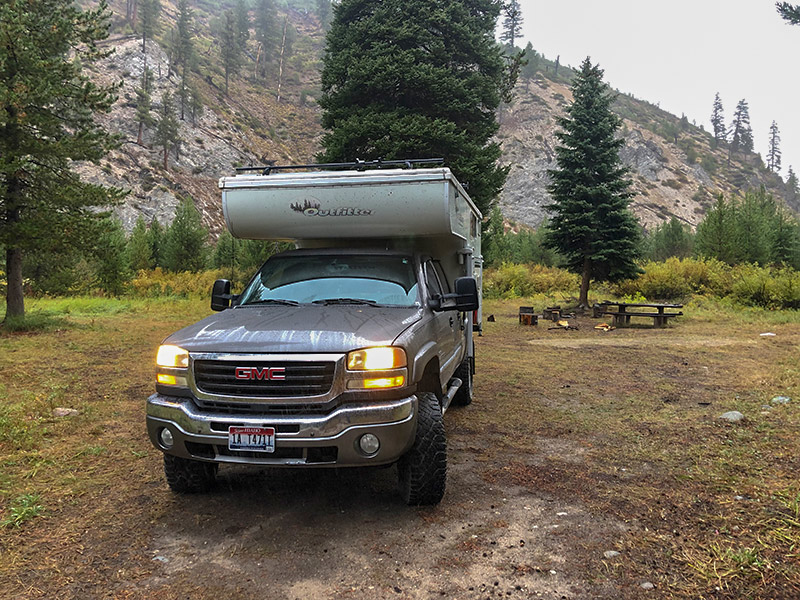 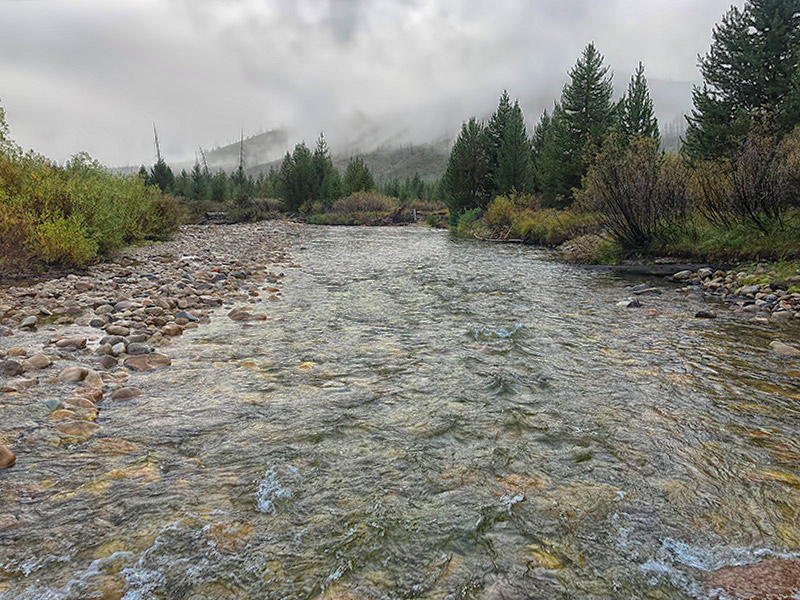 I couldn't believe my eyes on the drive out, snow. Like I said, climate change. 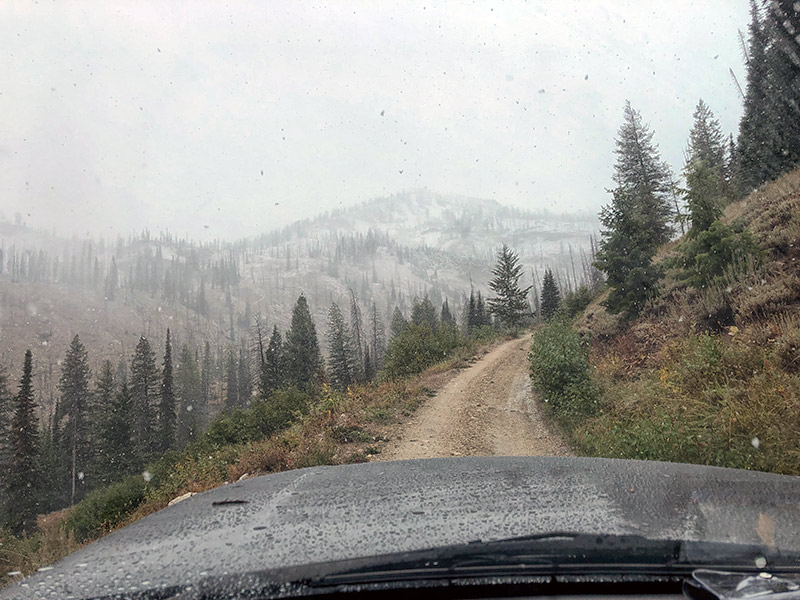 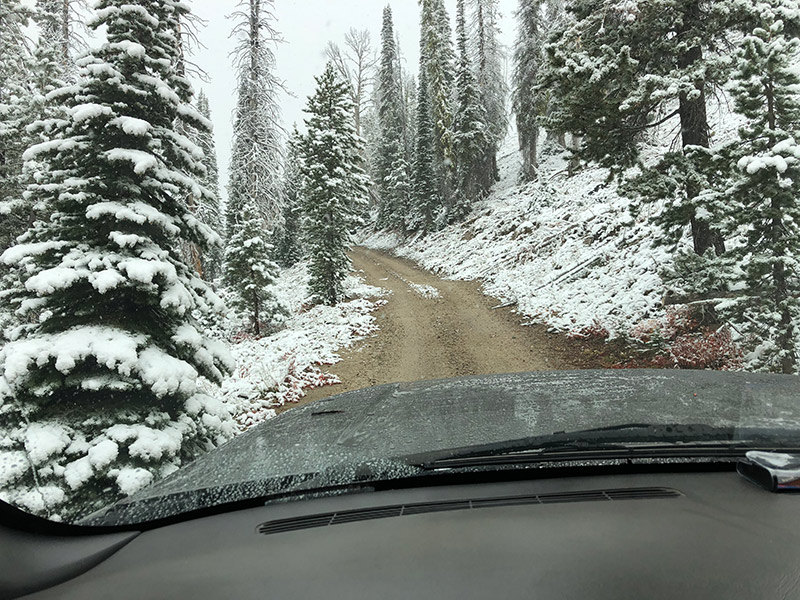 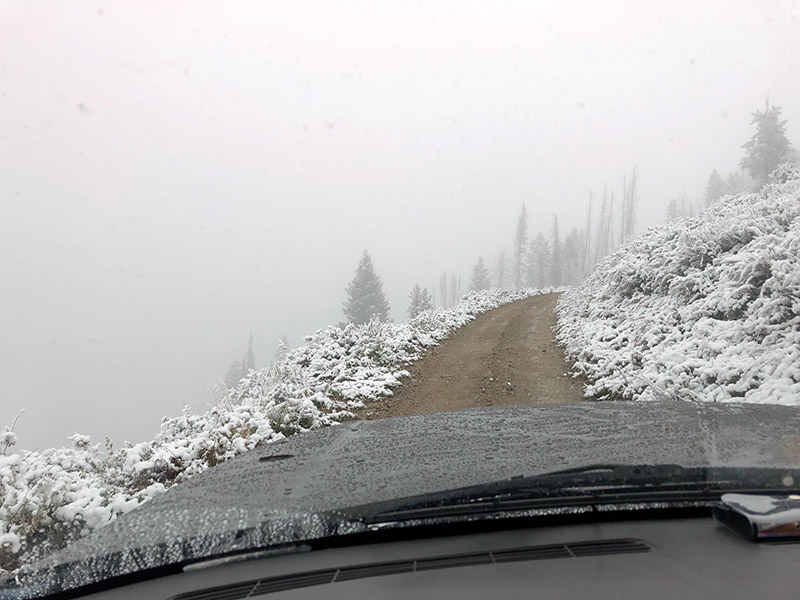 On the way in I had to stop on the other side of that tree and climb up on the nose of the camper roof. All those hangydangy branches were still there, waiting for me to break them with my hands to be able to pass underneath. 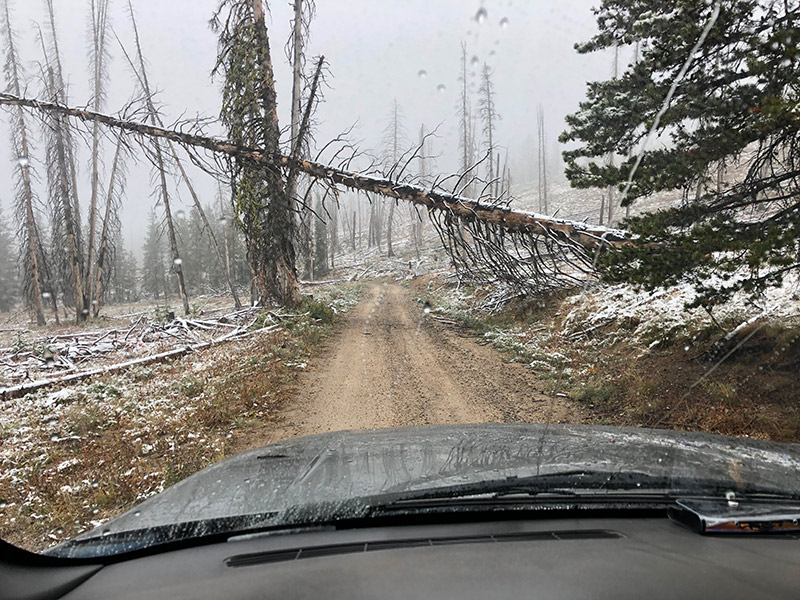 That's it, short and sweet, not good at all in the realm of trip reports.
And yes, it was a fish report with a beat...down. The beat down being the loss of time and having to make repairs in less than great surroundings, yet it could have been worse. The other beat down was the screams coming from a little dog, I'm sure the whole area thought we were rendering her with a dull knife. So we lost two days out of a four day trip but still managed to make it a memorable trip by catching the largest trout of my life to date, the boat and motor worked great and I got to catch trout on my new Tenkara rod. Thanks for telling me about Tenkaras Ben my Friend.
And thanks for reading...
Dave